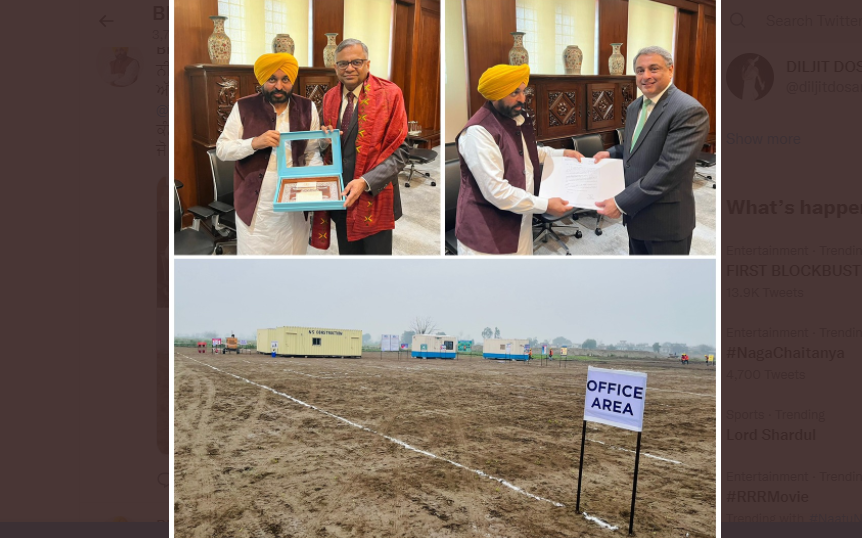 In consonance with the commitment of Punjab Chief Minister Bhagwant Mann to turn dreams into reality for ushering an era of industrial revolution, the work on setting up of scrap based steel plant by Tata Steel at a cost of Rs 2600 crore kicked off on Tuesday in Ludhiana.

“This is just the beginning as we deliver, what we say and the day is not far when we will make Punjab a frontrunner state in the industrial growth across the country”, said the Chief Minister during a meeting with the representatives of the Tata group in Mumbai on Tuesday.

The Chief Minister, while congratulating the Tata group for starting work on this ambitious project, assured fulsome support and cooperation to them in this noble cause. He said that this project is first ever investment made by this globally acclaimed company in the state and second biggest in the country after Jamshedpur. Bhagwant Mann expressed hope that investment by this major industrial group will further put the state on a high growth trajectory of industrial development besides opening new vistas of employment for the youth.

The Chief Minister described it as a ‘Dawn of New Era’ as earlier the Memorandum of Understanding (MoU) were confined upto paper only whereas now the actual work has started to give fillip to progress of the state. He said that earlier the companies were forced to ink agreements with the affluent families in the state to secure their vested interests. However, Bhagwant Mann said that now the pacts are being done with the people of the state to carve out a progressive, vibrant and peaceful Punjab.

The Chief Minister unequivocally said that the youth of the state will be immensely benefited from this project, which will play a key role in restoring the pristine glory of the state. He said that the Tata Group is investing around Rs 2600 crore in the first phase of the project coming up at Ludhiana, adjacent to Hi-Tech Valley Industrial Park of Government of Punjab. Bhagwant Mann envisioned that this prestigious project will prove to be a milestone in propelling industrial growth in the state.

The Chief Minister said that this electric arc furnace based plant will produce 0.75 MTPA finished steel adding that the raw material for the steel making process is 100% scrap. Bhagwant Mann said that the plant will be spread over 115 acres of land adjacent to the state-of-the art Industrial Park developed by PSIEC. He said that the project is part of the commitment of the state government to ensure that Punjab leads the country in the arena of industrial growth.