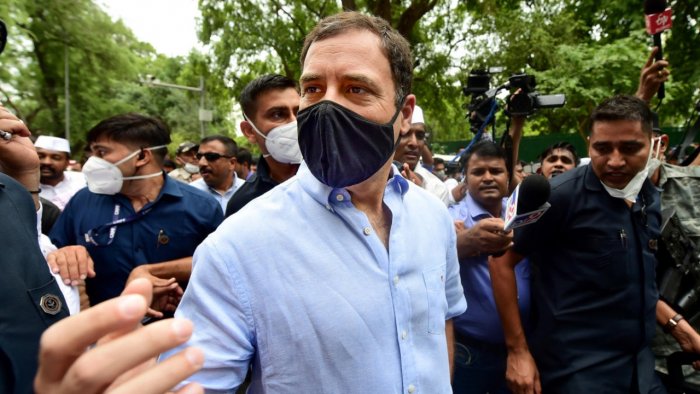 Addressing party workers at the Delhi headquarters, Congress MP Rahul Gandhi today said that the Enforcement Directorate officers were surprised by his patience and endurance. He said that he never felt alone in the office even though he was sitting in a 12/12 ft room with three ED officers. “I wasn’t alone in the room, all you Congress workers were with me. All those who believe in freedom were also with me,” he said.

Gandhi said the ED officers asked him at night how he was able to sit upright in the chair for over 11 hours without being tired, as they were tired. “I thought let me not tell them the real reason, I told them I do Vipassana. You have to sit for long hours in that, you get used to it,” he remarked in jest.

Rahul Gandhi then narrated the process he endured for five days. I answered questions, checked all the answers, and didn’t leave my chair much, he said, adding that on the last day the officers asked him how he has so much patience.

“I told them I won’t tell you…you know what the truth is? The truth is I have been working with Congress since 2004, of course I have patience. This party doesn’t let us tire out and it teaches us patience. Look at Sachin Pilot (indicating he is also patiently waiting for his due). That is how we fight for people,” he said.

Attacking the BJP government at the Centre for its policies, he said, “Didn’t I tell you that farm laws will be revoked? See, Modiji had to revoke it. Now I am telling you, the Agnipath scheme will be shelved. Wait and watch. The new ‘dhoka‘ that Modi has done with India and its army, will be undone.”

Meanwhile, Congress chief Sonia Gandhi has sought more time to appear before the Enforcement Directorate for questioning. Gandhi had tested positive for Covid and was hospitalised for related health issues.

The agency had earlier agreed to her request and gave her time till June 23.