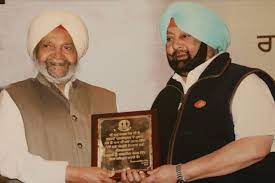 The Padma Shri Award has been announced for eminent scholar Dr Rattan Singh Jaggi from Punjab in the field of literature and education.

Dr Jaggi is well known in Punjabi and Hindi literary circles, with Gurmat literature being his forte. He has devoted more than 70 years of his life to serve the cause of Punjabi, Hindi and Gurmat literature.

Dr Jaggi obtained a PhD in 1962 from Panjab University, Chandigarh, on the subject of “Dasam Granth Da Pauranik Addhyan”.

He was awarded DLitt by Magadh University, Bodhgaya, in 1973 where his subject in Hindi was “Sri Guru Nanak: Vyaktitatva, Krititva Aur Chintan”.

Dr Jaggi has authored many books on Guru Nanak Bani. During the 550th Parkash Purb celebrations of Guru Nanak Dev, the Punjab Government got a volume titled “Guru Nanak Bani: Paathatey Vyakhya” prepared from Dr Jaggi in Punjabi and Hindi which was distributed.

Realising the need for an encyclopedia in order to answer the queries concerned with Guru Granth Sahib, in a brief but accredited manner, Dr Jaggi authored “Guru Granth Vishavkosh (Encyclopedia)” in 2002 which was published by Punjabi University, Patiala.

To honour Dr Jaggi for his accomplishments in the field of literature, Punjabi University awarded him honorary D Litt degree in 2014 with Guru Nanak Dev University, Amritsar, following the suit in 2015.

According to an official statement released on the eve of Republic Day, medical professional Dilip Mahalanabis who returned from the US to serve in 1971-Bangladesh war refugee camps, and noted architect Balkrishna Doshi were selected for the Padma Vibhushan posthumously.

No one has been named for the Bharat Ratna, the country’s highest civilian award.

US based mathematician Srinivas Varadhan was also selected for the Padma Vibhushan award.