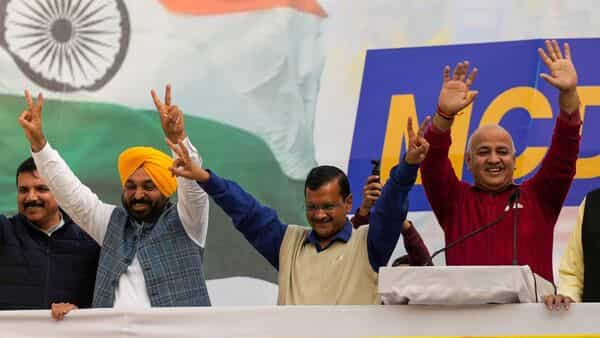 Aam Aadmi Party today acquired the status of a national party after it bagged over 13 per cent votes in Gujarat Assembly elections. Expressing joy, Delhi Chief Minister and Aam Aadmi Party (AAP) national convenor Arvind Kejriwal today said that AAP put up an impressive show in Gujarat and it was a ‘surprising achievement’.

Kejriwal recalled AAP’s inception 10 years ago, and pointed towards the fact that only a handful of parties are national parties in the country.

AAP polled over 13% votes of the total votes polled in the Gujarat assembly elections, the results to which were declared today. The AAP won 5 seats in the state where BJP won with a thumping majority by bagging 156 of the 182 seats.

In a televised address, Kejriwal said, “I would like to thank the people of Gujarat who showed faith in us. We held a very positive campaign throughout and didn’t malign any other party”.

He further said, “Gujarat is considered BJP’s stronghold and I am glad AAP was able to make a name for itself in this stronghold. Next time, we will hopefully win too”.